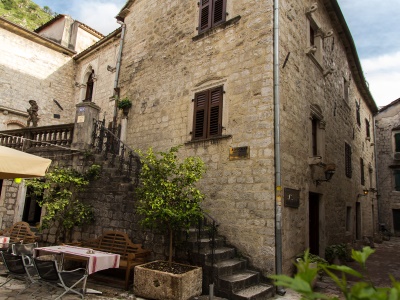 Kotor is situated on the southeastern part of Boka bay, on a foothill of the mountain Lovcen. The area of community of Kotor is 355 km2. Kotor is cultural, educational, economical an sport center of this area.
As the only fiord on the Mediterranean, Boka Kotorska was added to the list of twenty five the most beautiful bays in the world in July 2000, the others being mainly in Scandinavia. Kotor is situated on the southeast end of Boka Kotorska. The history of Kotor can be traced to the most ancient times. In the surrounding caves there have been found various tools and ceramics witnessing humane existence from the Neolithic period, as well as drawings on the walls of the cave at Lipci near Risan.
For its unique mixture of different cultures, Kotor entered the list of the world cultural heritage under the protection of the UNESCO. In the past, the most developed industry in this area was trade and maritime affairs. Seafarers used to bring different products from overseas which they would exchange for the goods they were in need of. In that way Kotor became one of the most important trading centres in this part of the Adriatic coast.